As of 2000, those who spoke only English at home accounted for 77.4% of all residents, while 22.6% spoke other languages in their homes. The most significant was Spanish speakers who made up 17.8% of the population, while French came up as the third most spoken language, which made up 0.6%, and Italian was at fourth, with 0.6% of the population.

Public primary and secondary education is operated by Hillsborough County Public Schools, officially known as the School District of Hillsborough County (SDHC). It is ranked the eighth largest school district in the United States, with around 189,469 enrolled students. SDHC runs 208 schools, 133 being elementary, 42 middle, 27 high schools, two K-8s, and four career centers. There are 73 additional schools in the district that are charter, ESE, alternative, etc. Twelve out of 27 high schools in the SDHC are included in Newsweek‘s list of America’s Best High Schools.

Marshall Student Center at the University of South Florida 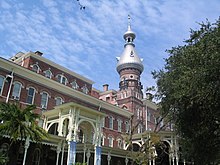 There are a number of institutions of higher education in Tampa.

The city is home to the main campus of the University of South Florida (USF), a member of the State University System of Florida founded in 1956. In 2010, it was the eleventh highest individual campus enrollment in the U.S. with over 46,000 students. The University of Tampa (UT) is a private, four-year liberal arts institution. It was founded in 1931, and in 1933, it moved into the former Tampa Bay Hotel across the Hillsborough River from downtown Tampa. “UT” has undergone several expansions in recent years, and had an enrollment of over 8000 students in 2015.

Hillsborough Community College is a two-year community college in the Florida College System with campuses in Tampa and Hillsborough County. Southern Technical College is a private two-year college that operates a campus in Tampa. Hillsborough Technical Education Centers (HiTEC) is the postsecondary extension of the local areas Public Schools district. The schools provide for a variety of technical training certification courses as well as job placement skills.

The Stetson University College of Law is located in Gulfport and has a second campus, the Tampa Law Center, in downtown Tampa. The Law Center houses the Tampa branch of Florida’s Second District Court of Appeal.

My name is Benjamin Frisk and I'm a licensed realtor that loves to provide high-level service. Please let me know how I can serve you!

My name is Benjamin Frisk and I'm a licensed realtor that loves to provide high-level service. Please let me know how I can serve you!